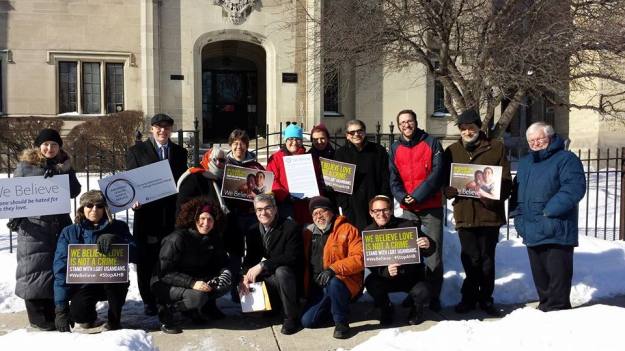 Today marked a day of global action of protest against the Ugandan Parliament’s so-called “Anti Homosexuality Bill.” It was my honor to participate by delivering a rabbinic letter to the Ugandan consulate in Chicago along with 15 other members of the the Jewish community, including five rabbis.

This bill, which was passed in December 2013, is a hate-filled piece of legislation that threatens the health and lives of LGBT Ugandans and is a grave violation of human rights. First introduced in 2009, the bill seeks to strengthen existing penalties in Ugandan law against homosexuality. Among the bill’s many cruel and unconscionable provisions is life imprisonment for “repeated homosexual behavior.” It also criminalizes what it describes as “the promotion of homosexuality,” which includes funding organizations that provide basic services such as healthcare to LGBT people.

Our action today was a sponsored by American Jewish World Service, who responded to a call from its partners in Ugandan Human Rights NGO by organizing in communities throughout the US. In addition to Chicago, similar actions took place in New York, Washington DC, Los Angeles and San Francisco.

Here’s the text of the letter we delivered to the Ugandan consul in Chicago:

I am writing to implore you, respectfully, to veto Uganda’s Anti-Homosexuality Bill that was recently passed by the Ugandan Parliament.

As a rabbi, I honor the inherent dignity of each and every person. Jewish theology, tradition and history compel me to uphold the values of kavod habriyot, respect for all of creation, and btzelem elohim, the notion that all people–including lesbian, gay, bisexual and transgender (LGBT) people–are created in the Divine image. Tragically, I know from our history that the stripping away of human rights from specific minorities is often a precursor to targeted destruction.

If this bill is signed into law, it would be a grave violation of human rights and would be one of the most abhorrent manifestations of discrimination against LGBT people worldwide.

My LGBT friends and colleagues in Uganda are frightened–and I believe they have every reason to be. I do not believe they should live in fear just because of who they are or who they love. I hope you share the same view.

I urge you, Mr. President, to use the power of your position to uphold the human rights and human dignity of all Ugandan citizens. Please stand on the right side of history by vetoing this bill.

I encourage you to click here to sign a similar letter currently being distributed by AJWS. (If you are a rabbi and you have not yet signed the rabbinic letter, click here.)

It’s time to stand with LGBT Ugandans – and all who are targeted by hate-legislation. 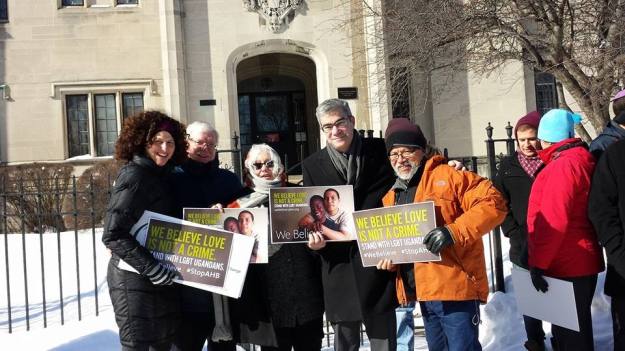