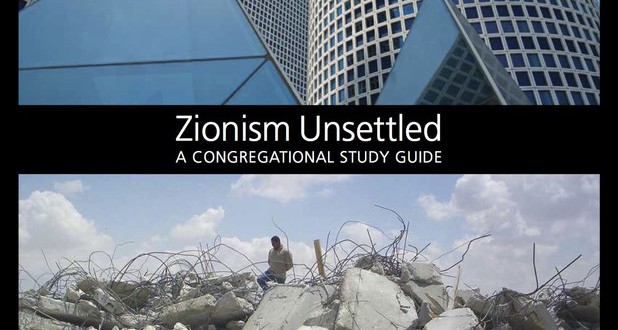 I read with dismay your recent “Open Letter to the Presbyterian Church,” in which you referred to the Israel Palestine Mission Network of the Presbyterian Church (USA) as “extremist” and called to their newly-published study guide, “Zionism Unsettled” a “dishonest screed.” As a rabbi who works actively alongside the IPMN – and whose words are quoted extensively in the guide – I am saddened by your words and feel compelled to respond.

As you might imagine, I take exception to your characterization of me as an “(accomplice) to sweeping denunciations of the Jewish people and their sacred traditions.” Needless to say,  if I felt for a moment that “Zionism Unsettled” represented an attack on Jews and Judaism I obviously would never have agreed to be quoted in the guide.

Granted, ZU is not a perfect document – but while I might disagree with some of its characterizations and specific points of rhetoric, I do believe it shines a courageous and important light on the ideological roots of the political reality in Israel-Palestine. It certainly bears little resemblance to the “anti-Semitic,” “ignorant” tome you so thoroughly excoriate in your letter.

I am tempted to respond point by point to your specific criticisms of the guide – and perhaps some day we will have the opportunity to debate them more thoroughly. For now, however, I’d like to address a paragraph in your letter that I found to be particularly troubling:

Even a cursory study of history reveals the varied and complex forms that Zionism has taken over the centuries. The yearning for their national homeland has been woven into the Jewish community’s daily life for millennia. The Torah (Deuteronomy) and the Tanakh (2 Chronicles) both end with images of yearning to return to the land; synagogues face Jerusalem; the Passover seder celebrated annually concludes with the prayer, “Next year in Jerusalem.” To suggest that the Jewish yearning for their own homeland—a yearning that we Presbyterians have supported for numerous other nations—is somehow theologically and morally abhorrent is to deny Jews their own identity as a people. The word for that is “anti-Semitism,” and that is, along with racism, sexism, homophobia, and all the other ills our Church condemns, a sin.

I believe your characterization of my sacred tradition is incorrect – and dangerously so. It is prejudicial in the extreme to equate Zionism with Judaism itself.  Zionism – that is, the movement to create a Jewish nation-state in historic Palestine – is in fact a political movement that was born in 19th century Europe. As such, it was a conscious and radical break with centuries of Jewish tradition that strongly cautioned against the establishment of an independent Jewish state in the land.

While it is certainly true, as you write, that the yearning for a “return to Zion” is suffused throughout Jewish tradition, it is important to note that this yearning was pointedly directed toward a far off messianic future. The rabbinic sages repeatedly and forcefully forbid the “forcing of God’s hand” through the creation of a humanly-established, independent Jewish state in the land, which they believed would occasion disaster for the Jewish people. Throughout the centuries, the Jewish return to Zion functioned as a symbolic expression of hope – not as a political call to action.

Contrary to your assertion, “Zionism Unsettled” never makes the claim that the Jewish yearning for return “is somehow theologically and morally abhorrent.” It simply makes the correct distinction between a centuries-old religious tradition that spiritualized the notion of return and the politicization of this idea by a modern nationalist movement.

In this regard, I find your use of the term “anti-Semitism” to slur those who oppose Zionism to be particularly pernicious. In fact, as I point out in the guide, before the establishment of the state of Israel, the political Zionist idea was hotly debated within the Jewish community itself. Many reputable Jewish figures such as Rabbi Judah Magnes and Hannah Arendt warned that the establishment of an exclusively Jewish state in a historically multi-religious and multi-ethnic land would inevitably result in conflict and a permanent state of war. It was certainly not “anti-Semitic” of them to suggest such a thing. On the contrary, they – and many others like them – were motivated by their concern for the security of the Jewish people and as well as for the well-being of all peoples who lived in the land.

While it is true that Jewish anti-Zionism has become a dissident voice in our community since the establishment of the state of Israel, as a rabbi who works actively in the Jewish community, I can attest that there are growing numbers of Jews – particularly young Jews – who refuse to tie their Jewish identity so thoroughly to the highly militarized ethnic nation-state that Israel has become.

At the very least, there is a growing desire to allow non-Zionist voices to be part of the Jewish communal debate once more. One notable bellwether of this phenomenon may be found in the Swarthmore Hillel student board’s recent unanimous decision to defy the guidelines of Hillel International and declare itself an “Open Hillel.” In a statement accompanying their resolution, these Jewish students noted:

All are welcome to walk through our doors and speak with our name and under our roof, be they Zionist, anti-Zionist, post-Zionist, or non-Zionist. We are an institution that seeks to foster spirited debate, constructive dialogue, and a safe space for all, in keeping with the Jewish tradition.

I trust you would never suggest that these Jewish students are driven by “anti-Semitism.” On the contrary, they are clearly motivated by sacred Jewish values and a courageous refusal to reduce Jewish identity to one political ideology. It is particularly notable that a number of prominent liberal Zionist voices are publicly voicing their support for the students of Swarthmore Hillel, indicating that our community may well be ready to return to a truly wide-tent debate on the role of Zionism in Jewish life.

For all of this, however, “Zionism Unsettled” does not, as you suggest, “(attribute) the plight of the Palestinians to a single cause: Zionism.” On the contrary, the study guide repeatedly points out that the political strife in Israel/Palestine is rooted in religious exceptionalist attitudes that are embedded within Judaism, Christianity and American culture alike.

For many of us, these are the critical – and too often ignored – questions for interfaith dialogue: what will we do with those aspects of our religious traditions that value entitlement over humility? Do we believe that this land was promised by God to one particular group of people, or will we affirm a theology that promises the land to all who dwell upon it?  Will we lift up the fusing of religion with state power and empire or will we advocate a religious vision that preaches solidarity with the powerless, the disenfranchised and the downtrodden?

There is much more I would like to say in response to your letter – and again, I hope that we might have the opportunity to debate the specifics more thoroughly. For now, I will only encourage you to reconsider your claim that “Zionism Unsettled” represents “a theological delegitimization of a central concern of the Jewish people.”

As a Jew, I can only respond that it is not for you – or anyone – to blithely conflate the tenets of a modern nationalist movement with a venerable and centuries-old religious tradition. And it is certainly not “anti-Semitic” to say so.