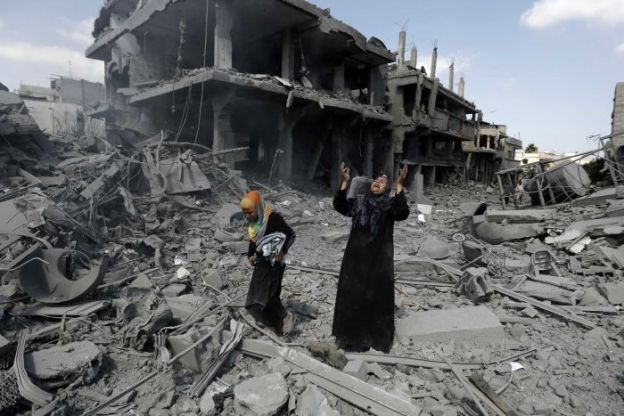 This Monday night begins the Jewish fast of Tisha B’Av: a day of mourning for the calamities that have befallen the Jewish people over the centuries. Among other things, the traditional Tisha B’Av liturgy includes the chanting Biblical book of  Lamentations.

Given the profoundly tragic events currently unfolding in Gaza, I offer this reworking of the first chapter of Lamentations.  I share it with the hope that on this day of mourning we might also mourn the mounting dead in Gaza – along with what Israel has become…

A Lamentation for Gaza

Gaza weeps alone.
Bombs falling without end
her cheeks wet with tears.
A widow abandoned
imprisoned on all sides
with none willing to save her.

We who once knew oppression
have become the oppressors.
Those who have been pursued
are now the pursuers.
We have uprooted families
from their homes, we have
driven them deep into
this desolate place,
this narrow strip of exile.

All along the roads there is mourning.
The teeming marketplaces
have been bombed into emptiness.
The only sounds we hear
are cries of pain
sirens blaring
drones buzzing
bitterness echoing
into the black vacuum
of homes destroyed
and dreams denied.

We have become Gaza’s master
leveling neighborhoods
with the mere touch of a button
for her transgression of resistance.
Her children are born into captivity
they know us only as occupiers
enemies to be feared
and hated.

We have lost all
that once was precious to us.
This fatal attachment to our own might
has become our downfall.
This idolatrous veneration of the land
has sent us wandering into
a wilderness of our own making.

We have robbed Gaza of
her deepest dignity
plunged her into sorrow and darkness.
Her people crowd into refugee camps
held captive by fences and buffer zones
gunboats, mortar rounds
and Apache missles.

We sing of Jerusalem,
to “a free people in their own land”
but our song has become a mockery.
How can we sing a song of freedom
imprisoned inside behind walls we have built
with our own fear and dread?

Here we sit clinging to our illusions
of comfort and security
while we unleash hell on earth
on the other side of the border.
We sit on hillsides and cheer
as our explosions light up the sky
while far below, whole neighborhoods
are reduced to rubble.

For these things I weep:
for the toxic fear we have unleashed
from the dark place of our hearts
for the endless grief
we are inflicting
on the people of Gaza.

46 thoughts on “For Tisha B’Av: A Lamentation for Gaza”