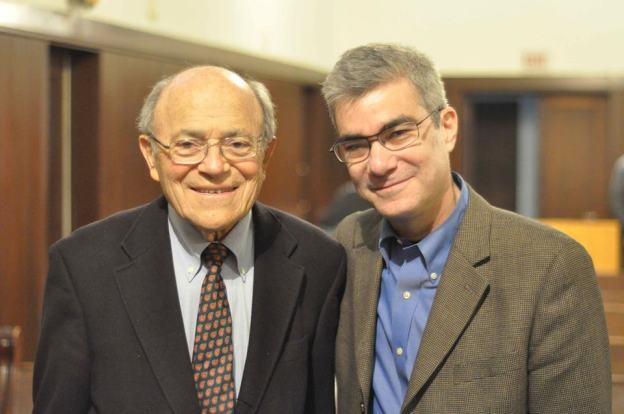 I am devastated to learn of the passing of my dear friend and mentor, Rabbi Leonard Beerman z”l, who died early this morning at the age of 93. His death comes as a profound shock to those of us who knew and loved him. Despite his advanced age, Leonard maintained his extraordinary vigor and energy until very recent days.

Readers of this blog may recall my post on our joint speaking presentation in Los Angeles last February. It was such a tremendous honor for me hold this open conversation with him, in which we mutually explored the subject of “Progressive Politics from the Pulpit.”

Here’s what I wrote at the time:

As Rabbi Beerman has been one of my true rabbinical heroes for so many years, it was truly a thrill for me to share a podium with him as we shared our thoughts on the challenges facing congregational rabbis who engage in progressive social justice activism.

As a Los Angeles native myself, I’ve long known of Rabbi Beerman’s inspired work during the years he served as the Senior Rabbi of LA’s Leo Baeck Temple. He was the founding rabbi of Leo Baeck in 1949 and stayed there for the next 37 years until his retirement in 1986. During that time, he challenged his congregants – and the Jewish community at large – to awaken to some of the most critical socio-political issues of the late 20th century.

Rabbi Beerman was a maverick in his day – and in many ways still is. He is a self-described pacifist who came by his stance honestly, after serving in the Marines in World War II and in the Haganah in 1947 while attending the newly founded Hebrew University. He was a student of Rabbi Judah Magnes, the great Reform leader who advocated for a bi-national state for Jews and Arabs – and he remains a passionate advocate for a just peace in Israel/Palestine to this day.

Rabbi Beerman came to Leo Baeck fresh from Hebrew Union College in Cincinnati during the height of the Cold War and quickly became an outspoken and visionary peace activist. In one of my very favorite stories, he described his anguish at the execution of Julius and Ethel Rosenberg, which took place on a Friday afternoon in 1953. During Shabbat services that evening, he decided to add their names to the end of the yahrtzeit list (the list of names read before the recitation of the Kaddish) much to the dismay of some of his congregants.

Rabbi Beerman was also one of the first rabbis in the country to publicly condemn the US war in Vietnam and later instituted draft counseling in his congregation. He invited such figures as Daniel Ellsberg (who spoke on Yom Kippur afternoon while he was awaiting trial) and Cesar Chavez to speak at his synagogue. Rabbi Beerman was also a visionary leader for civil rights and worker justice and during the nuclear arms race was one of the leading Jewish voices in the disarmament movement.

I’ve particularly admired Rabbi Beerman’s fearlessness when it came to the subject of Israel/Palestine – clearly the issue that has earned him the angriest criticism from the Jewish establishment. He was a consistent and faithful advocate for justice for the Palestinian people long before such a thing was even countenanced in the Jewish community. Literally going where few other rabbis would dare to tread, he met with Palestinian leaders such as Yasser Arafat and Fatah founder Abu Jihad. That he was able to do all of this while serving a large, established Los Angeles synagogue speaks volumes about his integrity – and the abiding trust he was able to maintain with the members of his congregation.

Now in his 90s, Rabbi Beerman is still deeply engaged in the issues of our day. During our conversation together, we spoke about the current state of the Israel/Palestine conflict, the languishing peace process and the rise of the Boycott, Divestment and Sanctions movement. I mentioned to those present that in 2008, during the height of Operation Cast Lead, when Rabbi Brian Walt and I were calling rabbinical colleagues to sign on to a Jewish Fast for Gaza, Rabbi Beerman was one of the first to sign on without hesitation. He did the same when we were forming the Jewish Voice for Peace Rabbinical Council and his presence there is truly an inspiration to our members.

Little did I know, as I wrote these words, that I would be posting them again in less than a year’s time, as a tribute to his memory. And little did I know last February, as I openly shared my open admiration for Leonard as a congregational rabbinical role model, that in only a few months I would be find myself unable to continue combining radical political activism with a congregational rabbinate. I am all the more in awe of what Leonard was able to achieve, serving as the rabbi for Leo Baeck Temple for 37 years as he bravely spoke out on important and controversial issues of his day. We will not soon see the likes of him again.

I encourage you to read this wonderful LA Times profile of Rabbi Beerman that was published just last month. You can see our presentation in its entirety below.

May his memory be a blessing forever.

9 thoughts on “Thoughts on the Passing of Rabbi Leonard Beerman, of Blessed Memory”