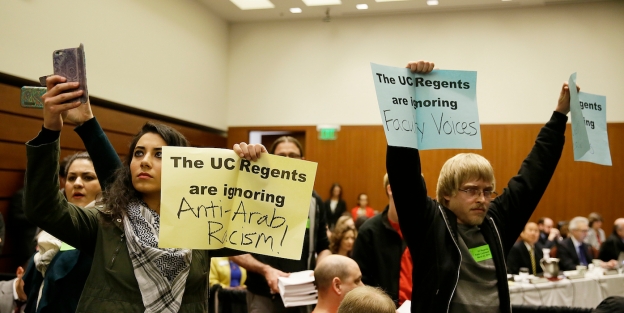 The regents of the University of California have spoken and has voted unanimously to adopt its working group’s “Principles Against Intolerance.” As I wrote last week, it is a report that dangerously conflates anti-Zionism with anti-Semitism in ways that make the report muddled, unenforceable, and a very real threat to the free speech of pro-Palestinian student groups on campus.

While most of the public debate over this report has focused on the challenge of balancing the UC’s desire to combat intolerance with the need to protect freedom of speech, it seems to me that one critical aspect of this issue has gone largely unaddressed: the fact that this report which purports to address the issue of intolerance on campus frames the issue almost exclusively in terms of anti-Semitism.

To be sure, if this report was intended to be a comprehensive statement on intolerance, wouldn’t the UC’s working group have consulted with a wide variety of experts on the campus intolerance currently faced by Muslim students, students of color, LGBTQ students, etc?  Tellingly, the report states that the working group “invited four recognized scholars and/or leaders on the subjects of discrimination, with a particular focus on anti-Semitism, and on free speech.” (Among these four expert/scholars were Rabbi Marvin Hier, of the Simon Wiesenthal Center, a high profile Israel advocate whose organization is currently building its”Museum of Tolerance” on top of an ancient Muslim cemetery in Jerusalem.)

Even more troubling, the opening “Contextual Statement” of the report states that the working group was formed in response to”public comment and concern from a variety of sources that there has been an increase in incidents reflecting anti-Semitism on UC campuses.”  The regents offer nothing more than this anecdotal statement to justify the formation of a working group and a months-long deliberation and debate on this issue. There is, however, no real evidence to support the claim that campus anti-Semitism is on the rise. Quite the contrary, as the Anti-Defamation League itself recently reported:

While (anti-Semitic) inci­dents are cer­tainly dis­turb­ing, it is important to note that these inci­dents are rel­a­tively rare, and the vast major­ity of Jew­ish stu­dents report feeling safe on their cam­puses.

This all begs the obvious question: why did the regents of UC feel the need to form a working group and hold a long public debate over a report such as this? I would submit it has nothing to do with genuine concern about intolerance on campus and everything to do with politics. This report is but a part of a much larger effort that seeks to stem the growing tide of the Boycott, Divestment and Sanctions movement on college campuses.

As the LA Times just reported:

The drive for the UC statement was led by the Amcha Initiative, a group that combats anti-Jewish bias on college campuses. Tammi Rossman-Benjamin, the group’s director and a lecturer at UC Santa Cruz, said campus demonstrations against Israeli policies and calls for the university to divest from firms with financial ties to Israel’s military have created blowback for Jewish students.

The involvement of the AMCHA Initiative with this “drive” tells you everything you need to know about the motivation behind the UC’s statement. AMCHA is a zealous Israel advocacy organization that fights campus “anti-Semitism” by monitoring college classes, spying on students and publishing names of “anti-Israel”professors. It bears noting that AMCHA was publicly admonished in 2014 by San Francisco State University (along with, you guessed it, the Simon Wiesenthal Center) for making false accusations against a professor. That same year, a group of forty Jewish studies professors from across North America wrote a public letter condemning AMCHA and its tactics.

It goes without saying that we, as students of antisemitism, are unequivocally opposed to any and all traces of this scourge. That said, we find the actions of AMCHA deplorable.

Its technique of monitoring lectures, symposia and conferences strains the basic principle of academic freedom on which the American university is built. Moreover, its definition of antisemitism is so undiscriminating as to be meaningless. Instead of encouraging openness through its efforts, AMCHA’s approach closes off all but the most narrow intellectual directions and has a chilling effect on research and teaching.

Given the involvement of groups such as AMCHA, it is difficult to view the regents’ statement as anything other than a caving in to the pressure of professional advocacy groups determined to quash BDS and shut down pro-Palestinian advocacy on college campuses. Sadly, by labeling this criticism of Israel and anti-Zionism as anti-Semitic, it only silences students, renders the term meaningless and makes it that much harder to take actual allegations of campus anti-Semitism seriously.

As the ADL has reported, the vast major­ity of Jew­ish stu­dents report they feel safe on their cam­puses. Some of them may be made to feel uncomfortable by Palestinian activism and divestment resolutions, but uncomfortable is a far cry from unsafe. And it is shameful that UC has allowed itself to be pressured into issuing an unnecessary and downright dangerous statement such as this.

Given the current climate in our nation, I’d wager if there was a group of students who might well feel justifiably unsafe, it is Muslim students. By all reports, college campuses are feeling the impact of anti-Muslim hatred that began with 9/11, and is currently being fanned yet further during this horrid election cycle. For more this particular subject, I highly recommend this powerful article by Nasreen Mohamed, an administrator at the University of Minnesota. I’ll end with her words:

After the ending of a successful program to welcome new international students, I noticed one of the students who attended the program struggling to figure out the bus route to get home. I stopped to assist her, and we ended up walking together as I happened to be going in the same direction. We struck up a conversation about walking on campus. She is a Lebanese Muslim woman who wears a hijab.  She asked me how safe it was for her to walk on campus. I gave her my administrative cautionary tale about taking safety precautions and avoiding walking alone late in the evening. After a pause, she asked me how safe it was to walk on campus as a Muslim woman, wearing a hijab. I realized in her pause and clarification that there was very little I could offer her in terms of a sense of safety. All I could do was to give her a realistic picture. I told her that there had been violence in the Twin Cities  and in Greater Minnesota, but nothing violent had occurred on campus. After I walked away, I realized that she will be met with the same micro aggressions that I had experienced post 9/11, and that our campus was still not equipped to protect her spirit.