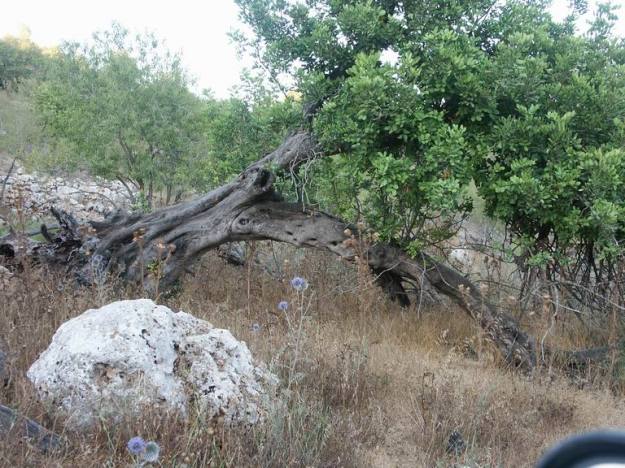 Every Tu B’shvat,
on a hill just west of Jerusalem,
almond trees are blooming their white blossoms
down a rocky terraced hillside.
Stone rubble is laced here and there along its slope –
the only remaining traces of the village
they called Khirbat al-Lawz.

Not long ago this place was populated by
hundreds of villagers who grew
olives, grapes, figs and tended farms
with sheep and chickens.
On the hillside there are two springs
called Ein al-Quff that sent water
down ducts that led to a well
built into the hillside.

Generation after generation
the farmers of the region
would parcel and share this water
to grow their crops.
Every evening after work, it is said,
the men of Khirbat al-Lawz
would gather near a carob tree
in the village center
to talk, smoke, drink and sing
late into the evening.

This life vanished forever on July 14 1948,
when the Haganah occupied and expelled
the people of Khirbat al-Lawz during a military action
known as “Operation Dani.”
The villagers remained in the nearby hills
hoping to return at the end of war,
but soldiers from the Harel Brigade
forbade their return
on pain of death.

Soon after the Jewish National Fund
built a thick forest of non-indigenous
evergreens around Khirbat al-Lawz
and the neighboring village of Sataf.
Today, the JNF website tells us:

This site offers many stunning walks in nature,
where you can also see olive orchards
and agricultural plots on
ancient agricultural terraces.
The two springs that emerge
from the site serve as a reminder
of an almost vanished Hebrew culture
dating back thousands of years.
Here, as in the days of the ancient Israelites,
irrigated vegetable gardens grow
alongside vineyards, olive groves and almond orchards
that need no artificial irrigation
and color the countryside green all year round.

Hikers today will surely not notice it,
but not far from these well groomed trails
you can still find the village center of Khirbat al-Lawz.
The spot is marked by an ancient carob tree
rising out of the thorns and dead grass –
bent and tilted to the side, but still growing.

According to the Jewish sages
it takes carob trees seventy years to fully bear fruit.
When we plant them, they say,
it is not for our own sake,
but for the benefit of future generations.

So this Tu B’shvat, think of a hillside
just west of Jerusalem
where the almond trees are blooming
down a rocky terraced hillside
and a sacred carob tree grows sideways
where a village center once stood.

Then close your eyes and imagine
the wind breezing through its leaves,
whispering to future generations:
you are not forgotten,
the time will yet come
for your return.