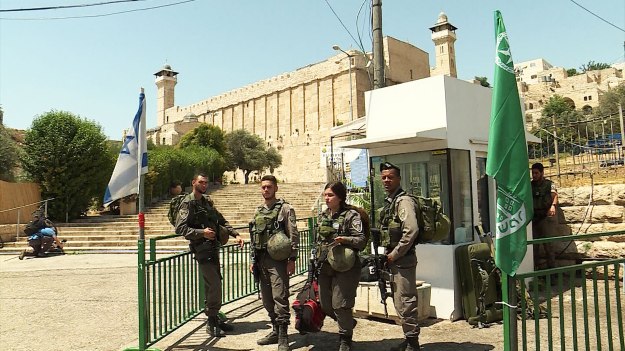 The Torah portion for next Shabbat, Chayei Sarah (Genesis 21:1-25:18) begins with a complex description of Abraham’s purchase of the cave of Machpelah as a burial place for his wife Sarah – a site that eventually becomes the familial burial plot for the Patriarchs and Matriarchs.

The name “Machpelah” literally means “the doubled one” for reasons that are not entirely clear. According the Midrashic legend, Adam and Eve were the first to be buried there. In a Talmudic debate (Eruvin 53a), Rav suggests the cave had two levels, while Rabbi Shmuel says it contained tombs in pairs. Abahu comments that anyone buried in the cave had a double portion in the world to come.

But there is a more compelling reason why this site might be called “the doubled one.” It has literally functioned for centuries as both a synagogue and a mosque.

Called Ma’arat Machpelah by Jews and Al-Haram Al-Ibrahimi by Muslims, members of both faiths worship on opposite sides of the large interior space. Today of course, this synagogue/mosque sits atop a virtual powder keg. After 1994, when a Jewish extremist settler, Baruch Goldstein, murdered twenty nine Muslims engaged in prayer in Al-Haram Al-Ibrahimi, the interior was divided by a wall, with two completely separate entrances for Muslims and Jews.

This “doubling” eventually extended to grip the entire city of Hebron. Following the massacre, the IDF imposed increasing curfews and restriction of movement on the Palestinian population. In 1996, as part of the Oslo agreement, Hebron was divided into two sections: H1 and H2. H1 is locally governed by the Palestinian Authority and is home to approximately 120,000 Palestinians. Tens of thousands of Palestinians live in H2 along under the control of the Israeli military, who are charged with the protection of 600 Jewish settlers who have aggressively moved into the city center. Since the Second Intifada, Israel increased their security crackdown on this part of the city, blocking off major streets to Palestinians – most notably the main commercial road, Shehadah Street. (The army refers to them as “sterile roads”).

Virtually every Palestinian shop in H2 has been closed and their doors welded shut by the army. Because the Palestinian residents of Shehadah St. are not allowed to walk on the road, they must enter and exit through the rear of homes because they cannot leave their own front doors. Because of these measures – and the ongoing harassment and violence at the hands of Jewish settlers – what was once the busting commercial center of Hebron has become a ghost town. 42% of its Palestinian homes are empty and 70% of its Palestinian business have been shut down.

Many right wing Jews claim that this Torah portion – which painstakingly reports Abraham’s negotiations for the cave – is the Jewish people’s “deed of sale” to this site. I would counter that the very attitude that regards a sacred religious text as a literal “deed of sale” explains in no small way how we arrived at this fearful moment.

I’d also suggest that the true power of this portion comes later – following the death of Abraham – when we read: “his sons Isaac and Ishmael buried him in the cave of Machpelah near Mamre.” (Genesis 25:9)

Considering that Machpelah is now more crime scene than sacred site, this poignant final image of “doubling” is all the more painful to contemplate.