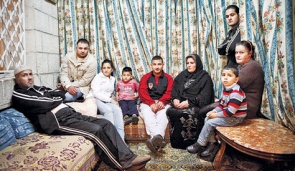 From the newly formed Campaign for Bedouin – Jewish Justice in Israel (a joint project of Rabbis for Human Rights-North America and the Jewish Alliance for Change):

While many of us will be gathering with our loved ones to celebrate Thanksgiving, the Sumarin family will be anxiously sitting on suitcases and wondering whether they will have a home in another week.

The Sumarins, a Palestinian family of twelve, including five children, a pregnant mother, and a grandfather on dialysis, have lived in their home for more than forty years in the East Jerusalem neighborhood of Silwan.

On Monday, November 28th, they will be evicted from their home – unless we raise our voices now.

We’re deeply troubled that a wholly-owned subsidiary of the Jewish National Fund in Israel, called Himnuta, is behind this move.

To expel this family is a violation of both Jewish and human rights law.   And it risks inflaming Arab-Jewish tensions in Jerusalem, further undermining the hope for Israeli-Palestinian peace.

Send a message now to JNF CEO Russell Robinson and urge him to stop JNF’s Himnuta from expelling the Sumarin family from their home.

The Silwan neighborhood has long been a flash point in the struggle over land in and around the Old City of Jerusalem and the site of clashes between Jews and Palestinians.

Twenty years ago, an ultra-nationalist Israeli government bent on expanding Jewish control in East Jerusalem took legal possession of the Sumarin home, along with other Arab properties in Silwan. The government transferred the Sumarins’ home to JNF’s Himnuta, along with seven other houses in Silwan.

Himnuta then turned its other East Jerusalem properties over to ELAD, a group whose explicit political agenda is to expropriate Palestinian homes and land in Silwan and transfer them to the control of Jewish settlers. There is every reason to expect that the Sumarins’ home will also end up in ELAD’s hands.

How has the Israeli government used the law to expropriate Palestinian property and land in East Jerusalem for Jewish settlers?Go here for the story.

Remind JNF CEO Russell Robinson that “legal” does not mean “just.”  The many anti-democratic and anti-Arab laws recently passed by the Knesset add yet more tragic testimony of the ways law can be used for injustice.

This will not be the last expulsion of a Palestinian family from Silwan by JNF’s Himnuta or ELAD.   Other families are facing the same threat.

Tell JNF CEO Russell Robinson: It’s time to end JNF’s role in expulsions or demolitions of Palestinian and Bedouin homes, whether in the Negev or East Jerusalem.

For more information, see this recent article in Ha’aretz and this post from Sheikh Jarrah Solidarity.